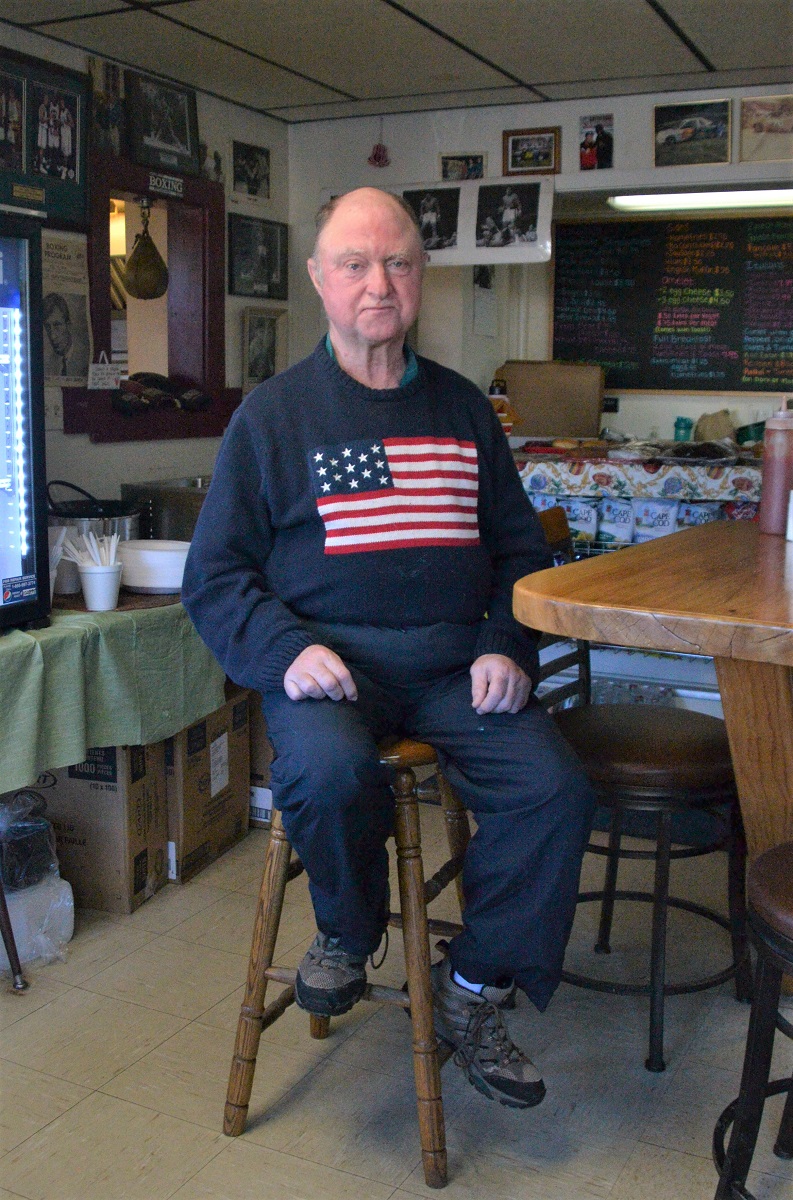 Well, I wish what had been different is that I wasn’t at Pineland, but now I’m not, so that’s a blessing in disguise.

PAUL EASTON HAS MIXED FEELINGS ABOUT HIS STAY AT PINELAND, A HOSPITAL AND TRAINING INSTITUTION FOR THE DEVELOPMENTALLY DISABLED.  LIFE THERE COULD BE HARSH, BUT THERE WERE SOME GOOD THINGS, TOO.

Well, they was pretty strict, but there were some of them nice, too, like the shopmasters and all that, at shop. I got along good with them.

When I was about three years old, we lived in Gorham, and we had at Westbrook and the house got on fire and the firemen came and got me out.  I was three years old; just a little baby when they took me out, saved me from getting burnt up in the fire.

FOR PART OF HIS CHILDHOOD, EASTON WAS PLACED IN A FOSTER HOME.  ONE FOSTER HOME IN SACO WAS SOMETHING OF A NIGHTMARE

See, my foster home, that I was in in Saco, it was (inaudible).  Like they would put me down in the cellar.  The cellar was dirt and there’s no floor in the cellar, except dirt.  It was dirt on there. And they put me—put my hands like this, tied them up so I couldn’t…When they had visitors I was like that.  I couldn’t go up to—I don’t think I could even go to the bathroom.  It was that bad.  But their daughter, she didn’t like that [when] they put me in that kind of a condition, so she went to the state.

WHEN EASTON WAS TEN, HE WAS TAKEN TO PINELAND BECAUSE OF BEHAVIORAL ISSUES.

It was like going to a strange place. I had to get used to the place.  What they did was my mother and father drove over to the building where they did the signing to let the person come to Pineland and then from there I went to a hospital, stayed in there for about a year or two.  I’ll say about a year, yeah.  I got out of there.  I went from the hospital to Pownal Hall and after I went to Pownal Hall, I went to [Staples] Hall. Then I went to Gray Hall, then I left.

AT PINELAND, HE WAS ASSIGNED TO A DORM

Us boys would be in one room.  The girls would be in another.  And there’d be the bedroom, with our bed and then they would mark you clothes, like put your name on your clothes. They would do that.  It didn’t make any sense to me, but they did anyway.  And then if you do something wrong, there, this is what they would do.  (Inaudible) in bed, because they were so rugged.  You’d be in the middle and they’d be over here like this and they’d go [vocalization] squeeze. If that wasn’t enough, they’d have you go up and down the floor with heavy stockings until you got tired

HE SAYS THE STAFF WOULD SOMETIME SQUEEZE THEIR STOMACH UNTIL THEY HAD A STOMACHACHE.  BUT HE DOES REMEMBER SOME OF THE ACTIVITIES. COMPETING IN SPORTS WAS ONE OF HIS FAVORITE THINGS

Well, we went to the gym and we had movie night, dance night and of course I was in the Special Olympics.  I was one of them in it.  I was on the basketball team and I kind of liked that.  I’ll tell you what part of the court I played—center court.  And softball, baseball. I was always pitching or playing out in the field .  What I did one time.  I didn’t have my glove on. The ball was coming and I caught it bare handed.  I couldn’t believe it.  I was only about ten years old when that happened.

Like I said, I was in a lot of sports and I went to school at Pineland and I went to a workshop at Pineland, which is good. I get to meet a lot of shop masters there. One of them was named Jim, I think that’s him, yeah.  He taught me how to drive the shop truck slowly, like try to stay on the road, without getting off the road.  He taught me to do that.  Then I went on the John Deere tractor and learned to drive that. What we did with that, we went and sprayed the apple trees and cut the grass down there at that apartment.  Then we went and cut around the duck pond.  And we had the pheasants, too, up in one of the buildings.

HE LEFT PINELAND WHEN HE WAS FOURTEEN, AND FOR SEVERAL YEARS HE WAS PLACED WITH A GUARDIAN, AND HE LIVED WITH HIS BROTHER.  IT WAS AT THE PINELAND DANCES AND MOVIE NIGHTS THAT HE MET HIS WIFE CAROL AND IN 1985, THEY MARRIED.

We got married at the Church of God on Park Avenue, Portland and the pastor paid for it. It was a small wedding, it wasn’t big. We couldn’t afford a big one, so it had to be small. He took it out of his on pocket.   He knew we couldn’t pay even for a small one, so he just made it easy on us.

PAUL AND CAROL WERE MARRIED FOR TWENTY YEARS.  SHE DIED IN 2005.

I was married to a good woman.  I liked her and loved her very much.  I still do.  I miss her a lot.

HE WAS ON HIS OWN AS A YOUNG MAN AND HE JOINED THE PORTLAND CHAPTER OF THE GUARDIAN ANGELS, AN UNARMED GROUP FORMED IN 1979 TO PATROL URBAN STREETS.

And what they do is take care of the streets when the police department won’t do it.  They take over.  They do what the police don’t do.  I kind of miss that.  I did that for I think four years.  Then the Portland Police got jealous, so the whole team had to drop out.

It’s a coffee, donut and food restaurant type of thing.  People go in there and they play games, or cards, and stuff like that…In the wintertime I shovel snow.  I shovel the steps and little bit of the sidewalk.

BUT THERE’S ONE MORE THING HE’D LIKE FOR HIMSELF.

For myself?  I like to try to look after myself.  A new wife, yeah, that’s what I was hoping to get again, get married again.  That’s what I’ve been praying for.  (Inaudible), too.  Pray that I’ll get someone again.