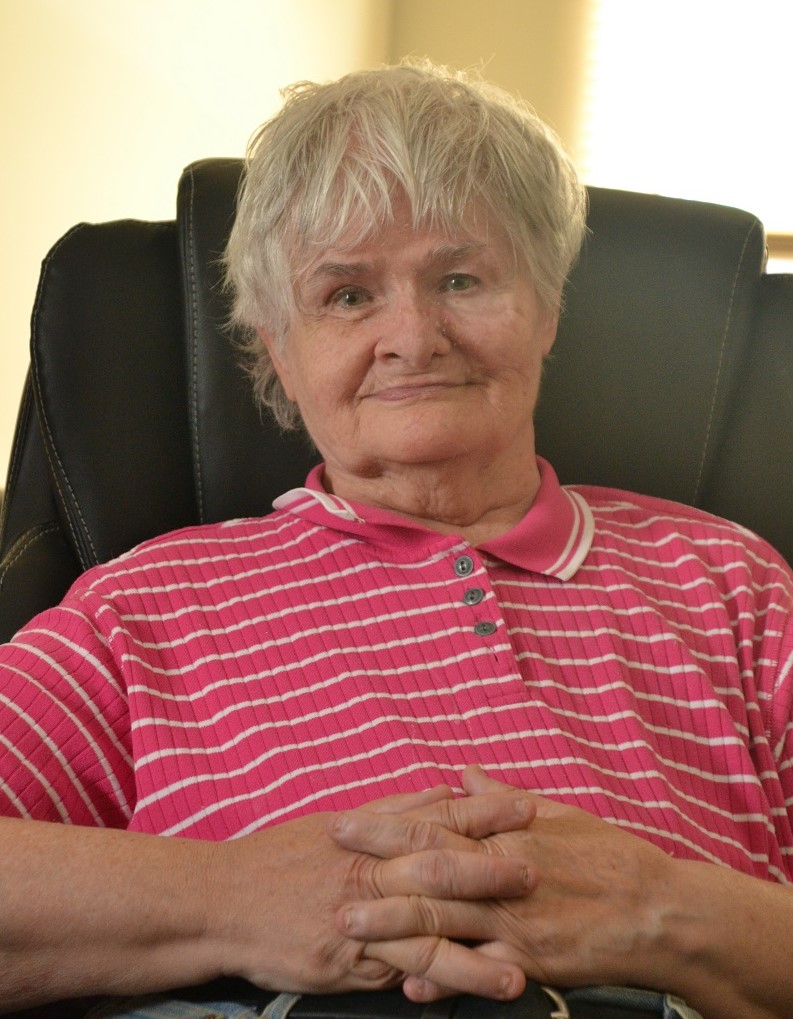 My name is Maryann Preble.  I was born and brought up in Bangor. I lived there for quite a while and then when my mother passed away, I ended up in Pineland.

MARYANN PREBLE WAS ONCE A RESIDENT AT  PINELAND HOSPITAL AND TRAINING CENTER, ALSO KNOWN AS THE POWNAL STATE SCHOOL ND THE MAINE STATE SCHOOL FOR THE FEEBLE MINDED.  SHE WAS BORN IN 1949 AND LANDED THERE WHEN HER MOTHER DIED.

Yeah, we got there and it was like a place that I never—It was strange, it was like, “I don’t want to be here.”  And so I went over to the administration building. They took me in to like a hospital, or whatever.  My folks couldn’t come for a while, because where I was just—It hurt me to see them to leave and I got really upset and crying and stuff and they were going to come in and put me in a straight jacket and give me a shot.  I finally calmed down, you know, it took me a while, but it was just like they put me there and they went off. And it hurt.

PREBLE SAYS SHE WAS OFTEN CALLED HURTFUL NAMES WHILE SHE WAS AT PINELAND. IT WAS THE KIND OF PLACE THAT IMMEDIATELY MADE HER WANT TO LEAVE.

There were bars on the windows and we went from there to another building for breakfast and then I went to work at Pineland for a while and I went out to work until I was sixteen and I ended up back in Pineland and it wasn’t a place that I wanted to be and I wanted to go back home and I got to crying and everything and they were going to put me in a straight jacket and so I calmed down and it was like a place that I’d never seen before.  When somebody else act out and if they were near somebody that they didn’t know, they said it was me that did it and I’d be locked up in a room with just a mattress.  I couldn’t have any clothes or anything on me.

LIFE AT PINELAND WAS HEAVILY REGIMENTED.

We’d get up, we’d take our showers or whatever. We’d get ready for breakfast. Everybody’d line up, go out, go to the other building to eat, then we’d come back and we’d do our chores, whatever  we had to do there and we had to tell them if we were going out into the area, or if we had to go to work or whatever.  It was kind of not—I felt like I didn’t want to go to work.  If I didn’t, then I’d end up being punished for not doing work I was supposed to do.

AND SHE WASN’T ALWAYS  ABLE TO DO WHAT SHE WANTED TO DO.

WHEN SHE WAS ABOUT SIXTEEN, PREBLE WORKED IN THE LAUNDRY AT PINELAND.

It was okay, but sometimes, you know, I didn’t like it but it was do that or be not doing nothing at all. If I didn’t go to work, I wouldn’t be able to have the money to go to the canteen, or doing things with the other ones.

ON AN OUTING, SHE HAD A CHANCE MEETING WITH HER BROTHER AND HIS WIFE.  THEY WERE ABLE TO GET HER DISCHARGED FROM PINELAND AND TOOK HER TO LIVE WITH THEM

I was glad when it came the day for me to leave because my experience being there when I was ten, it was like, “Good, I’m not there any more.  I’m out in the community with my family and stuff.  I don’t have to go to bed when I’m told or line up to go outside during the winter or…”   I was safe from what I was in Pineland.

AFTER STAYING WITH THER BROTHER, PREBLE STARTED FINDING HER OWN PLACE,

I made up my mind once I got in Pineland that I was going to get my own place, be out on my own. I went from being with my brother and his wife (inaudible) from there into a group home in Winthrop.  And once I was in that place, I mean, with other people, I got to go  to see my family, quite a bit and then I said that I was going to go out and find my own apartment, which I did in Hallowell.  I got to work at the preschool in Hallowell.  That was nice working with kids, and I got paid doing that. Then they had to let be go because they couldn’t pay me any more.

AT THE GROUP HOME, SHE WAS ABLE TO LIVE A MORE INDEPENDENT LIFE

We got to share in the cooking, we got to share in the housework.  People had different things to do at the group home.  One or two people would do the living room or the kitchen or the halls.  We did our own bedrooms. It was nice, it was like being in a regular setting.

AND THEY COULD CHOOSE AND COOK THEIR OWN MEALS.

We made quiche, we made spaghetti, potatoes, vegetables.  We would, all of us would make out the menu…and it was nice, it was like being on your own, not being in Pineland, or—everybody shared what they wanted to.

PREBLE MARRIED, AND WHEN HER HUSBAND NEEDED NURSING CARE IN AUGUSTA, SHE WAS ABLE TO FIND AN APARTMENT NEARBY.  SHE VOLUNTEERED AS ACTIVITY DIRECTOR AT THE NURSING HOME. SHE DELIVERS MEALS TO SHUT INS AND SHE HAS BEEN ABLE TO ADVOCATE FOR HERSELF AND FOR OTHERS.

I’d advocate for people that couldn’t advocate for themselves and it’s brought me closer to doing something for other people and—I wouldn’t be on these committees if it wasn’t for me, for doing, for advocating for, speaking up for—because a lot of people that are in group homes and stuff, they’ve always—I’ve heard them say they want to be out on their own. They want to have an apartment, they want to get married, you know.  It’s like, you’ve got to speak up and tell them.  You’re not going to be able to do it if you don’t.

MOST OF ALL, SHE ENJOYS HER INDEPENDENCE.

I like what I’m doing. I like making my own decisions, being able to go where and when I want and not being with a whole bunch of other people.  It’s like (inaudible exclamation) I’m free, I’m out on my own, it’s like,  “What am I going to do next?” I volunteer and after I volunteer, you know it’s like I feel good. It makes me feel good doing thing for other people.