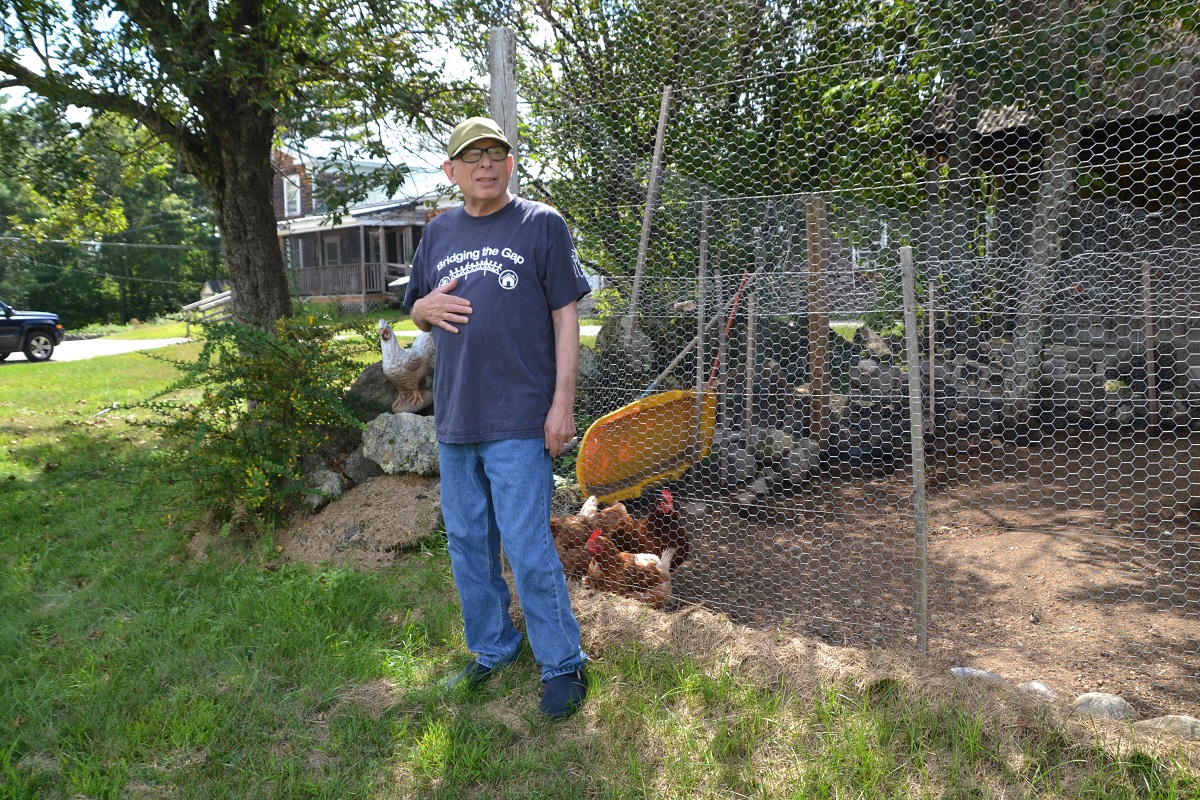 JAMES REED WAS BORN IN 1942, IN FARMINGTON, MAINE, AND SPENT ABOUT TWO YEARS AT PINELAND HOSPITAL AND TRAINING CENTER, AN INSTITUTION FOR THE DEVELOPMENTALLY DISABLED THAT MADE HEADLINES IN THE 1950’S, ’60’S AND ‘70S FOR ITS POOR CONDITIONS.  HE WAS RAISED BY HIS GRANDPARENTS ON A FARM IN OTISVILLE

BUT HIS RELATIONSHIP WITH HIS GRANDFATHER WAS SOMEWHAT STRAINED

He swore awful! Arrgh!  I couldn’t stand him if I wanted to.  Something wicked came out of his mouth, so I kind of didn’t like that.

HIS PARENTS COULDN’T TAKE CARE OF HIM, AND HE RAN AWAY FROM ONE GROUP HOME BECAUSE HE WANTED TO GET AWAY FROM EVERYBODY, SO HE WAS SENT TO PINELAND.

Well, I’ll tell you one thing.  It wasn’t very good in Pineland.  I’ll tell you that.  The food was no good.  That’s for sure.  They’d lock the door on me.  I couldn’t go out, so that’s one thing I couldn’t do… They just kind of cooked something and then shove it down my throat.  I didn’t like that either.  They want to do that, too.  And I got very sick from that stuff…Too much headaches, you know, and the food wasn’t too good.  They was going to pound the shit out of me.  I didn’t like that, either.

They had to …That’s not good.

PRIVACY WASTN’T THE ONLY THING LACKING.  HE SLEPT IN A DORM WITH FEW COMFORTS.

There was no—no sheets and no nothing there.  You couldn’t cover up if you wanted to…I wanted to get out of there, just as quick as I can.  I’ll tell you.  I didn’t like that.

MUCH OF THE DAY AT PINELAND WAS SIMPLY BOREDOM. THERE WAS NO ACTIVITY AND LITTLE TO DO

HIS LIFE WAS DIRECTED ENTIRELY BY OTHERS AND JIM WAS ABLE TO MAKE FEW DECISIONS FOR HIMSELF.

I didn’t make any decisions at all.  That’s one thing I didn’t do.

REED WAS LATER RELEASED FROM PINELAND IMMEDIATELY STARTED CALLING ATTENTION TO THE DIFFICULTIES THERE.

When I come out of there, I wrote a letter to the Governor, telling [him] to close it down and I guess everybody else was glad to get out of there, too.   They didn’t like it.

PINELAND CLOSED IN 1996 AFTER DECADES OF CONTROVERSY AND PUBLIC OUTCRY.  AFTER PINELAND, JIM STAYED IN A SERIES OF GROUP HOMES AGAIN.  NOT ALL OF THEM WERE IDEAL.  HE REMEMBERS THE BATHROOM IN ONE HOUSE.

REED HAS BEEN ABLE TO WORK,  HE WORKED AT GOODWILL AND HELPED IN THE MANUFACTURE OF DENTAL FLOSS AND TOOTHPASTE. HE LIVES IN A GROUP HOME AT LIMERICK, MAINE NOW, IN A RURAL SETTING WHERE HE KEEPS CHICKENS—RHODE ISLAND REDS

I was out there today cleaning out the chicken coop.  I cleaned that out this morning, right after breakfast.

HE HAS A GUARDIAN WHO HELPS HIM WITH MONEY AND OTHER DECISIONS. IT APPEARS HE HAS FOUND A HOME.